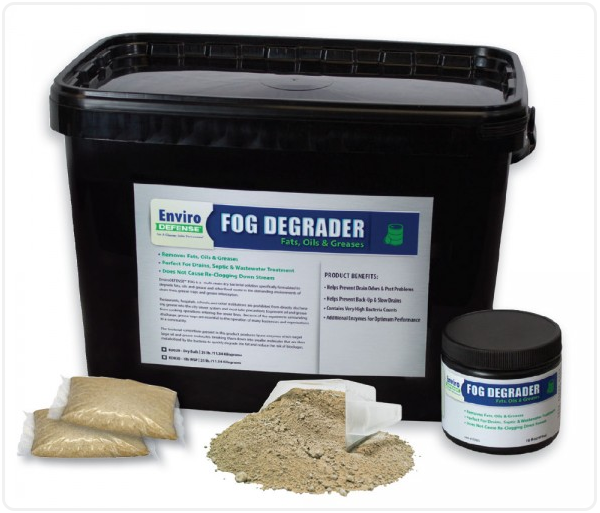 EnviroDEFENSE® FOG Degrader is a powdered product for use in wastewater systems and grease traps.

The bacterial consortium present in this product produces lipase enzymes which target large oil and grease molecules, breaking them down into smaller molecules that are then metabolized by the bacteria to quickly degrade the fat and reduce the risk of blockages. As the lipase enzymes get to work free fatty acids are released, which reduces the pH, creating a harsh environment for bacteria. The strains in EnviroDEFENSE® FOG Degrader are specially selected to work effectively in lower pH ranges found in grease traps and grease interceptors. They have been shown to break down a wide range of materials found in grease traps and grease interceptors:

Grease build ups are often the cause of slow drain and sewage back-ups as well as creating drain odors and even pest problems. EnviroDEFENSE® FOG Degrader is developed for grease traps, associated drain lines and fat problems in water treatment plants.

*Rates Based On Every 500,000 Gallons Of Flow Per Day. Use start up application for first 30 days then use routine application.

PARAMETERS: For biology to work properly, certain conditions must exist:

The images below show the degradation of fats, oils and greases by EnviroDEFENSE® FOG Degrader in a wet well from a packing house. In one month, EnviroDEFENSE® FOG Degrader removed more than 75% f the fats, oils and greases clogging the well and lines. Photo on the left shows the well before using Fog Degrader. The photo on the right shows the well one month after treatment.